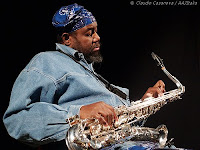 The first time I met David S. Ware was in the spring of 1999 in Paris.  I can’t remember the name of the festival, I think it was the Banlieues Bleues Festival, but I can’t be sure. He was there with his energy-charged quartet with Matthew Shipp on piano, William Parker on bass, and Guillermo E. Brown, who had just replaced Susie Ibarra on drums. We both had new CDs out on Columbia/Sony at the time, so a couple of the record label people from their France division took me to the concert. I was on tour with the Jacky Terrason group, and we just happened to have that particular night off. The timing couldn't have been better. 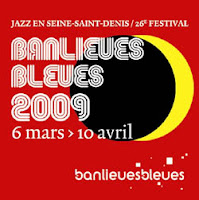 Before David's group played that evening, several free jazz/improvised music groups went on before him. I remember that a lot of it sounded very weird to me at the time. I hadn’t really gotten into improvised music back then.  For me to listen to esoteric ensembles made up of just two saxophones; or trumpet, cello and drums playing noise and texture, and squeaks and squawks--not caring whether you liked it or not--was way too outside of my post-young-lions comfort zone. I would probably dig that type of thing much more now, and in some cases, possibly prefer it.  You might say it was my first live experience with Euro-free jazz.

When David’s quartet finally played,  it probably sounded the tamest of all the bands I heard that night, which is saying a lot considering the raw, unapologetic recklessness with which his quartet would often swarm the bandstand. Being that they had all of the conventions of a typical jazz group---a melody instrument supported by a rhythm section, they were playing over grooves, forms, and chord changes, in the loosest sense of the word—they were by far the most conventional group on the bill. And I guess it’s all relative. If that very quartet played at the Village Vanguard, Smalls, or The Jazz Standard, it would have sounded far from "tame." 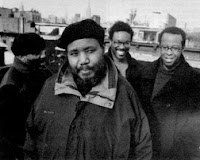 After the show, one of the label people who was chaperoning me that evening took me backstage to meet him. I remember as we were walking down the dark corridor toward his dressing room, I saw a light at the end of the hall, and from it I could hear a voice speaking very loudly and passionately, as through an altercation was about to transpire. But as we got closer, we realized that it was David. He was prancing around the room, speaking to a small audience of band members, festival workers, and fans about having heard John Coltrane in 1967.  Listening to the passion with which spoke about Coltrane's music made me envious that I never got a chance to experience the spirituality and the intensity of his music live.  Even thirty years after, David was still speaking about it as though he had just heard him the night before. He kept saying, almost as a chant,
"John Coltrane. 1967. I was there. Don’t tell me. I was there. 1967.” It was like someone remembering meeting a messiah. Someone who after meeting once, totally changed your life. It reminded me of when I was growing up in Virginia,  and I used to witness people in the church find Jesus during the Sunday morning service. 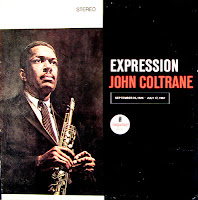 Hearing him speak this way, even three decades later, you get an insight into how Coltrane’s music, mainly from the album Expression, recorded months before his death, shaped David’s aesthetic. This recording with Pharoah Sanders, Jimmy Garrison, Rashied Ali, and Alice Coltrane, was by far some of his most spiritually reaching music. In some ways, it bypassed much of the complexity found in a lot of his previous work. It has the calmness, tranquility, and contentedness of someone who has finally seen peace with himself and was ready to take that long-awaited journey home.

After David had come out of his Coltrane-induced trance, we were finally introduced. And when he found out that we were both on the same label, his eyes developed a little sparkle of interest. David told me that Branford Marsalis, who was the acting A & R person at the time, and who was one of the people instrumental in signing us, gave him a stack of CDs of new Columba/Sony releases. He said that he hadn’t yet heard mine,  but he was looking forward to checking it out. 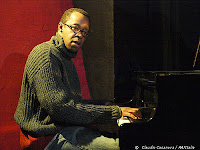 Unfortunately, our paths never did cross again after meeting him on that memorable evening. However, his bright spirit and uninhibited music will be forever engraved in my memory.  His imposing height, his wardrobe of African garb and basketball sneakers, the cryptic-like metaphors he used when talking about music, his slow and confident walk with a slight limp, the way he would canvass the room with his eyes, as though he was trying to size up everything and everyone in his periphery, it all symbolized a man who was as individualistic off the bandstand as he was on.  Matthew Shipp summed it up best when he said that David was "the last of the Mohicans." And I’m sure wherever his spirit is now, he’s impacting everyone and everything along the way, the way he influenced all who stood in his dressing room that night, the way Coltrane obviously changed him during that vital concert in 1967.  R.I.P.

Detroit Marriott at the Renaissance Center

ALL SHOWS CANCELED DUE TO COVID 19 THREAT

Modin Center for the Arts