Creating listening guides to follow along with for music that you're listening to is a great way to develop a "big picture" understanding of what's going on during a musical performance.

As musicians we sometimes get so bogged down with the notes that are played, that we fail to see how they actually function in the larger context of the music. Listening guides such as this give us a second to second account of the musical activity of the piece, highlighting not only the important moments that propel the music forward, but the various performance practices used to create these moments.

Here's one I created from a duo performance by saxophonist Wayne Shorter and bassist Esperanza Spalding playing "Footprints" on the Tavis Smiley show.

0:55 - Wayne plays the melody for the 2nd chorus, embellishing it at the end of the second bar, using one of his common techniques of playing the phrase an octave higher. This is a very effective way of giving the listener one of those unexpected twists and turns.

1:19 - When the top of the third chorus begins, Wayne doesn’t begin his improvised solo right away. He pauses for one measure, giving the music a chance to breath, creating tension from the anticipation of what he’s about to play next. At first it seems insignificant, but this is one of those subtle things that separates “hot shots” from master storytellers. Often times our real genius comes not from what we play, but what we don’t play.

1:37 - Wayne quotes the melody for the last two bars of the chorus, which also may seem insignificant at first.  But again, this is one of those subtle things that Wayne does which gives his solos clarity. Having different parts of the melody reoccur during your improvised solo provides depth and a sense of purpose for the other things that you've played.

1:42 - Wayne begins his third chorus playing the melody for the first measure and then uses the rhythm from the melody as the basis for his improvisation for measures 2, 3, and 4.

2:03 - He starts off his solo with a rhythmic motif that he develops until he gets to measure 9, after which he plays one of his signature phrases that descends in whole steps.

2:48 – He plays the melody out, phrasing it again in 4/4 time, which Esperanza quickly picks up on.

3:07 – Beginning in the 11th measure he plays a rhythmic pattern, two against six, which he continues until they fade at the end. 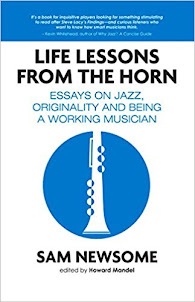 "I wish I had this book when I was much younger, as I'd be probably be further along in my studies by now!" - Ethan Iverson