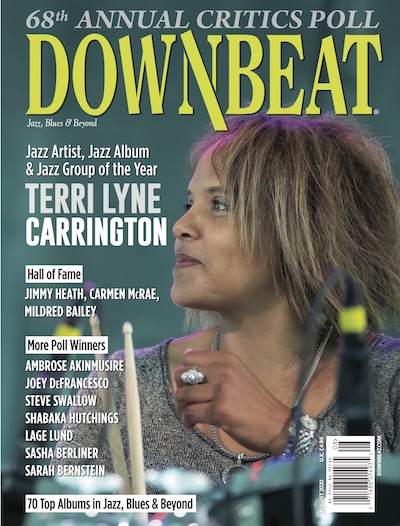 In the August 2020 edition of DownBeat, guitarist Jimi Durso submitted a solo transcription and analysis of "Sub-Saharan Dialogue" from my 2012 release, The Art of the Soprano, Vol. 1.
I'll spare you my analysis, Jimi's is much more thorough. Check it out! 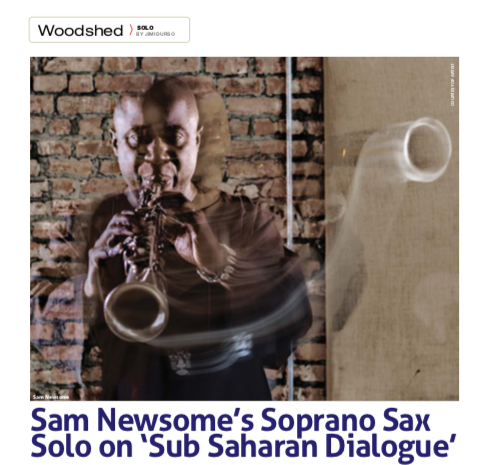 Performing a piece as an unaccompanied horn player is quite a feat. To record an entire album like this—without the ability to play chords and to accompany oneself-- shows tremendous ambition and requires some real ingenuity. To do multiple albums this way displays vision, dedication and maybe a little insanity. Sam Newsome has taken on this challenge, and successfully applied it to the soprano saxophone, creating varied and inventive ways to use the instrument so that we don’t miss any other instruments.

One example is the tune “Sub Saharan Dialogue” from Newsome’s 2012 album The Art of the Soprano, Vol. 1. His solo is presented in concert key.

By playing two low notes at the beginning of each two-measure phrase, Newsome has created a sort of de facto bass line for his solo. Of course, jumping up from these low notes to improvise in the upper octaves requires some serious skills, as well as the lung power required to keep this up for 48 measures with minimal breathing spaces.

Besides the soprano saxophone virtuosity on display here, there are other impressive aspects to this solo. One is how Newsome treats the implied harmonies.

At first glance, we have alternating eight-bar groups of A dorian and Bb dorian. But Newsome doesn’t play it like it’s just Am to Bbm; he puts some effort into making the harmonies more ambiguous. He hints at this in the second bar, where he start a line with notes that fit with Am7 and ends it with a D major arpeggio. His lines in measures 7 and 8 start out as more of an Em7 sound, and end with A and F#, which could imply the D chord that he played previously, but also could be heard as F#m or Am6. I think the point is that it could be any of those; it’s undefined.

Measure 10 is another example. On the Bb minor, Newsome plays what is clearly a Db maj7 arpeggio. However, Db maj7 is also Bb m9, only without the Bb, so this isn’t that far removed from the parent key. Bar 14 is the same, except Newsome also adds in the ninth (or the 11th, if you’re viewing it from the B♭ perspective), making it sound a bit further from B♭m. Repeating this idea four bars later is no accident. Notice how the scalar passage in measure 12 (which, traversing from C down to G, also adds to the ambiguity of the harmony) reappears in measures 15–16. Newsome also recycles the Db maj9 idea in measure 28 and (sort of) in bars 31–32 (which we’ll examine a little later).

Newsome also continues the polytonality, with the next A minor section showing a remarkable concept approach: In measure 18, he plays what clearly sounds like a B minor pentatonic lick. All the notes of B minor pentatonic exist within A dorian, so on one hand it’s not “out.” But at the same time, it makes it sound less like A minor and more like B minor, which are two very different things.

This gets taken up a notch in measures 23–24. Newsome plays descending seventh-chord arpeggios. The chords he plays— D7, Cmaj7 and Bm7—are again all part of the A dorian mode, but playing them as actual arpeggios makes it sound more like he’s playing changes rather than playing modally. For this, the lack of a rhythm section actually serves him, as not having anyone else defining whether it’s modal or not adds to the mystery of his playing.

As to recycling ideas, at the beginning of the next B♭ dorian section (bars 25–26), Newsome reuses his idea of descending arpeggios within the scale, but here does it mostly with triads (Db maj7 to Eb to Db). He repurposes this idea, as well, playing the D♭maj7 without the fifth in bar 31, and in the next measure including the #11, while still leaving out the fifth. This makes the sense of the harmony even less defined.

Since Newsome is supplying his own accompaniment in the form of the repeated root notes at the start of every two-bar phrase, he keeps that resolutely consistent. To create contrasting rhythmic variety, notice how he doesn’t start his improvisatory lines at the same time after that. There are places where he starts nearly right away, leaving only an eighth-note of silence (bars 5, 7, 13, 19, 21, 23, 25, 29, 31, 35, 37, 39 and 43), and less commonly waiting until the next bar before playing (bars 3–4, 11–12, 17–18, 27–28) and variations in between.

Even in this, there is some consistency, as the places where Newsome lets more time pass typically occur in the first two phrases on each scale. He tends to fill more space in the final two phrases, building up to the scale changes.

Also interesting is how Newsome never anticipates the changes. He seems to be hearing the bar lines as borders, never implying the next chord in his lines. Considering the harmonic vagueness of his lines, this helps to make the changes, as well as the rhythm, abundantly clear in a context where there are no rhythm section players to elucidate these elements.

Newsome’s manipulation of range also tells a story. His first phrase stays low, only going up an octave from the bass note. But each subsequent phrase for the A dorian section pushes the boundary further, going up another fifth in bar 4,up to a high G in the following phrase and up another third after that. This last phrase also falls all the way down toward the bottom of the staff, balancing out all the climbing he’s done.

On the Bb dorian section that follows, Newsome starts from this bottom but quickly moves up to a high Ab (close to the ceiling he’s set up), and next plays around a higher C (also near this upper limit). His next two phrases mirror these in range, basically setting up a new upper limit.

This high point remains for the next 11 bars, but in measure 28 he crosses this border, ascending almost an additional octave up to a high G. This is a high point in his improvisation, and it occurs at almost the midpoint of the solo. The next two phrases work their way down, until at bar 34 we’re at a middle B, which, with the exception of bar 40, becomes the ceiling for the next 10 bars.

Newsome doesn’t just let us down softly, though. For the penultimate lick (bars 45–46) he quite suddenly hits close to that climax, and then plays in between the extremes he’s set up for the closing statement. This last phrase has a nice symmetry, starting with Ab-to-F and then leading up to Ab-to-F an octave higher. 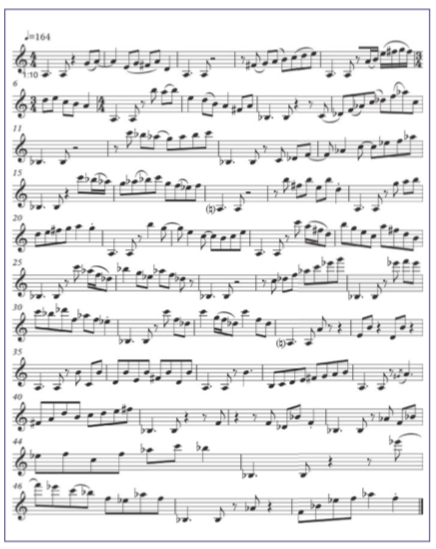 Thanks, again, to Jimi Durso for his fine work. And to DownBeat Magazine for their continued support.
Oh yeah, if you're are curious about the 2020 DownBeat Polls in the Soprano Saxophone categories, look below. As you know, you must take this stuff with a grain of salt. And remember this: It's not about making the polls, but making a difference.
But congrats to all that made it, and to all that didn't. Your voice and your journey matters, whether you know it or not. 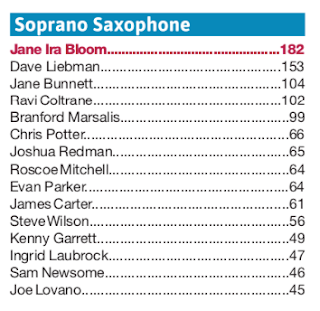 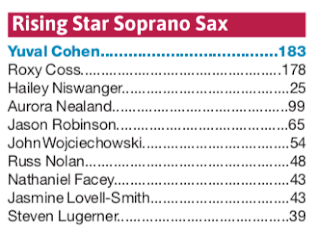 ALL SHOWS CANCELED DUE TO COVID 19 THREAT

Modin Center for the Arts